Chaminade Mock Trial made history at the Stanley Mosk Courthouse on Wednesday capturing both the 2016 Junior and Senior Division Los Angeles County Championships sponsored by the Constitutional Rights Foundation. It is the first time ever that one school has won both.

More than 150 schools and more than 2,500 students argued the People v. Awbrey, a case focused on the issue of human trafficking. During more than a month of competition that spanned seven rounds, the High School Legal Eagles went undefeated on their way to repeating as County Champions. In the final round, Chaminade’s Defense team faced a rematch of last year’s championship against the Los Angeles Center for Enriched Studies. The Defense legal team, led by attorneys Spencer Levitt ’17, Conor Fairtlough ’17, and Rebecca Steinberg ’18, argued their case to Superior Court Judge Ron Rose and six distinguished scoring attorneys from the LA District Attorney’s office, the Public Defender’s office, the California Attorney General’s office, and the US Attorney’s office.

The middle school team also went undefeated throughout the competition facing John Adams Middle School in the finals.  The Prosecution Team led by attorneys Katherine Schultz ’21, Skyelar Takac ’21, and Brendan Teehan ’21 won the verdict, and Katherine Schultz was recognized as the MVP for the round.

Other students receiving individual recognition for their outstanding performances during the competition include Maxwell Newman ’17 as top Pre-trial Attorney and Rebecca Steinberg ’18 as top Defense Attorney. Armen Ajemian ’21 from the middle school team was also recognized as the top Defense Attorney for the junior high competition. 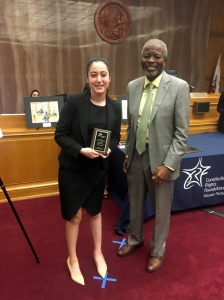 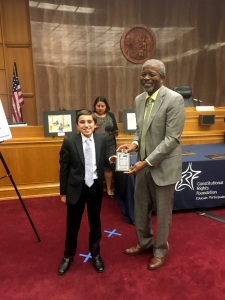 The championship teams are coached by Jennifer and Bert Bader.

The high school team now moves on to the California State Championship to be held in Riverside March 24-26, 2017.