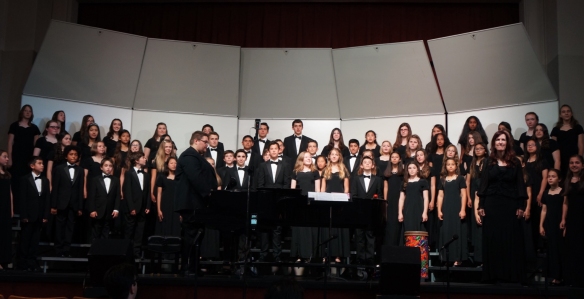 Chaminade’s middle school choir, the C-Notes, earned a superior rating of Gold for their performance in the Worldstrides On Stage Heritage Festival at Fullerton College. The C-Notes performed repertoire from three different choral genres: two Renaissance Motets, a piece with text from the great Irish Poet William Butler Yeats called “Cloths of Heaven,” and an a cappella African-American spiritual. A panel of three choral expert adjudicators judged them on the many aspects of choral singing such as tone, balance, blend, diction, intonation, rhythm and interpretation.

Kathy Rhors, Chaminade’s middle school music teacher and C-Notes director, says “I was very proud to stand with these wonderful children and make beautiful music together at the Heritage Festival. Earning the gold was exciting. However, the journey taken was much more important. Over the past months, our students have been learning that choral music is much more than singing the right notes…they now know what it means to work as a team to make the music come alive with expression, tone, and precision.”

After the festival, The C-Notes spent the afternoon at Disneyland and attended the evening awards ceremony at the Fantasy Theatre. They have been invited to perform again in the National Youth Festival at Carnegie Hall on March 12, 2017. The C-Notes will submit a DVD audition to the Carnegie Adjudicators to be the feature choir. The results will be announced at the end of October 2016.

1 thought on “C-Notes Earn Gold at the Heritage Festival”